A email friend (Carol Mathers) from Canada has sent me these two photos of Evelyn Kissack. Evelyn was a daughter of John/Jack Kissack and Alexis Torrie. We arent able to date them, but my friend writes:

"I can't specifically date them although for my mother to have kept them, I suspect Evelyn may have been about the same age as my mother (or maybe a little older). My mother was born in 1921 and I thought Evelyn in these pictures looked to be in her late teens, but I'm not a good judge of age!

As to where the photos were taken, the one on the boat identifies the ship's port as Victoria, British Columbia on Vancouver Island, so I would think that's the location, in fact it looks like the car ferry from Victoria to Vancouver to me. The other photo seems to have mountains in the background, doesn't it? I think it was also taken in British Columbia? Maybe Vancouver or thereabouts. " 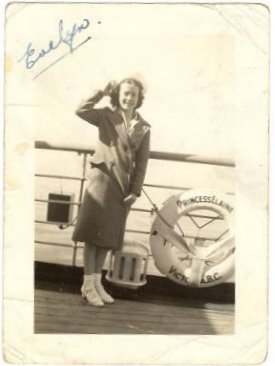 A search of the internet reveals Princess Elaine in service from 1927 to 1963 on the Vancouver to Nanaimo day run, so that gives us a date range. Evelyn certianly looks quite young; as she does in this second photo: 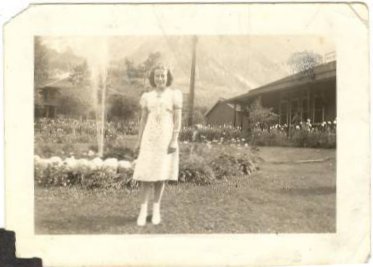 If anyone has further information on Evelyn, then I'd be delighted to receive it (just use the "contact me" link).