Because my father was expected to go abroad with the RAF, it was decided that it'd be wise for me to go to boarding school at age 11 (this is when secondary education begins in the UK). This would ensure continuity of education and so it was off to the King's School in Grantham that I went.

It was fairly traumatic as an 11 year old to be left at school by my parents, but this got easier after a couple of terms. The school week included Saturday mornings, which was unusual in those days - the plus side of this was that the holidays were longer. We had to wear caps, again becoming more unusually in British schools. Sixth former's (ages 17/18) had different colour ties to differentiate them and prefects had purple rather than black jackets.

As boarders, we were all in one 'house' (a grouping of students within the school) so we were in a natural team group when competing against other houses. In the first year, there was about a dozen of us and we all slept in one dormitory on the top floor of the boarding house. The school was set around a quadrangle, two and a half sides being bounded by classrooms, and the remainder by the boarding school buildings. There were many dormitories of various sizes scattered around and as you progressed up through the school years you also changed dormitories. Some sixth former's had an individual room. We had a live in house master and 2 matrons to look after us. The matrons took the place of mum in the first year, guiding and helping us along, washing our hair, making sure we had taken care of laundry and bed changes etc. They really were essential and a valuable asset in those early months. The house master was a bit like the headmaster of the school, he was in charge and would be the person who came around last thing at night to turn the 'lights out'. more on The Kings School 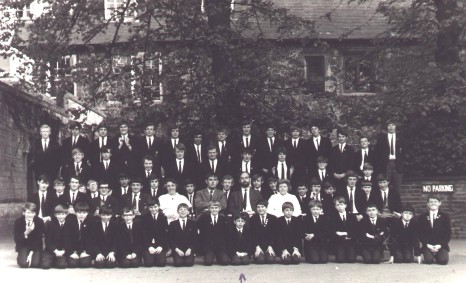 In addition to the dormitories, we'd have a couple of day rooms (sixth former's had a study per three or four students), a dining room (used by the school for weekday lunches) and the quad was available for games in the summer evenings. Homework meant a trip back to the classrooms where the housemaster or a sixth former would supervise to ensure that that is what we did! Five minutes before each meal, there was an additional bell that called all boarders (excluding sixth former's) to a 'line up' in the corridor. Here a sixth former or housemaster would inspect hands, both sides, before we were allowed to proceed to the dining room to eat.

Weekly we'd receive and sign for an amount of pocket money, this was part of the fee parents paid upfront. We had to justify it with a request for toothpaste, polish etc. As the years progressed, the disciplined relaxed slightly, We could go up to the sports field at weekends, to the nearby Wyndham Park, even into the town and surrounding area (each time filling in a book, with details of where we were going, when, and when we got back - often having to physically report to the housemaster on our return). Sixth former's, who were over 18 were allowed if their parents had so permitted, to 'sign out' to a public house. Of course this system on it's own did not prevent us, as under-age drinkers, visiting a couple of local pubs (The Joiner's Arms (now the 'Nobody Inn') and a free house on the road to Gonerby were favourites, not least because teachers did not frequent them). We once got caught smoking behind the school swimming pool, and after 'six of the best' decided that that was not a safe venue for pursuing that habit - although we did later use the venue to practice wheelies on a Yamaha FS1E moped that a 'day boy' had and brought down on an evening.

There was a combined cadet force (CCF) at school and this was great fun for us as young lads. We had the opportunity to fly and shoot, to use radios and go away on camps. As borders we were allowed (?) to use the radios at weekends and this provided more fun although I suspect that the larger radios may have interfered with TV's in local houses as we used them unsupervised. In the fifth form (i think it was then), all the boarders where called together to search for a statue that had gone missing (presumably quite valuable, but just looked like a piece of wooden art that you see brought back from Africa, these days). On my search I found a rifle (I think it was an air rifle) secreted away and on reporting it to a sixth former was threatened and sworn to secrecy. I often wondered whether that statue had been used as target practice! Boys will be boys, is the saying, and on a visit home to RAF Digby I had found in the old WWII shelters an amount of live .45" bullets. I had polished these up and taken them to school, only to lose them. Horror of horrors was when one night the house master came round at lights out with these bullets in his hand stressing the danger of them and asking if anyone knew where they had come from. I decided silence was the best option, but imagine that I must have coloured up in embarrassment and uneasiness!

As an all boys school, we didn't have much female company, but with the opportunity to go out at weekends, we soon discovered girls and friendships were forged. The town had a girls school as well as several other mixed schools. In the sixth form we shared lessons with the girls school when we studied computer studies. The girls in their sixth form didn't have to wear uniform, and it struck me that these were truly young ladies and not the schoolgirls we had come across in earlier years. There was one young lady who was a friend (not romantically) to a few of us and because of the need to sign out in the evenings and weekends, found that her home (in a nearby road) was frequently appearing as a destination to three or four boys on a weekly basis. It always surprised me that this was never questioned, but it worked well and allowed us the freedom to escape regularly.