After leaving school in 1976, I carried out a bit of casual work, but decided to follow in my father's footsteps and join the Royal Air Force.

Although I had played a part in the Combined Cadet Force (CCF) at school, it did not fully prepare me for the culture shock of Swinderby. Here we were to be made fit (fitter than I have ever been, at the end of 6 weeks), become disciplined, fly (as a passenger - so no airman could say he hadnt been in touch with what the air force was about!), shoot, march, march, clean and clean again. It was an experience that I still look back on as being valuable, it was a good start to my service career, instiling the team work and perserverence qualities that are essential in the forces, but also of great personal benefit.

Moving on from kitting out, haircut, and being introduced to our 2 story home, Ward block, we had jabs and introductions into those essential skills - polishing boots, ironing, cleaning and polishing of everything that didnt move in the block. The floors were spotless and the polisher an interesting block of iron on a pole that you put a piece of blanket under to raise a shine as you swung it up and down the floor (an excellent aid to fitness if not the most efficient polisher in the world). Your bed could not be left made, each morning at an unearthy hour, it had to be transformed into a 'bed pack'. 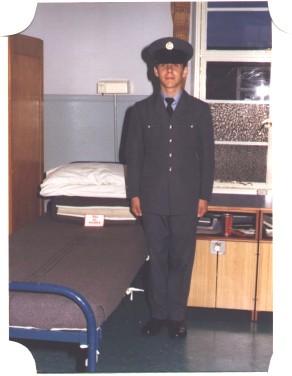 me and my bed pack!

If the bed pack was good enough, by the inspecting corporal or sergeant's standards, it could stay that way until the evening. Otherwise it would be thrown off the bed so that you could get some more practice! The corporal and sergeant were all seeing, they could shout - boy could they shout! They were judge and jury in metting out punishments for trivial misdemeanours. They made our life hell, with not a minute peace - yet as the weeks went by we saw the logic in their approach. We learnt what was expected, to work hard and play hard. As a flight, we bonded as a team, sharing our hatred of our NCO's, but again, in the final weeks found that they became part of our team - as we all worked together.

After a couple of weeks we were allowed off base at the weekend. However this had to be in number 1 uniform (complete with easily identifiable reflective hat band). The guy in the bed next to me, Keith, lived in Newark, so we headed there for our first bit of freedom, not least because Keith's girlfriend had lots of female friends. I was a smoker at the time and thought, in the safety of a local market town, it'd be safe to light up - wrong! No sooner had I than a complete stranger came across, introduced himself as an off duty RAF sergeant and instructed me to put it out. Another lesson learned - this was a 24 hour job.

Here's a couple of photos of my flight and section: 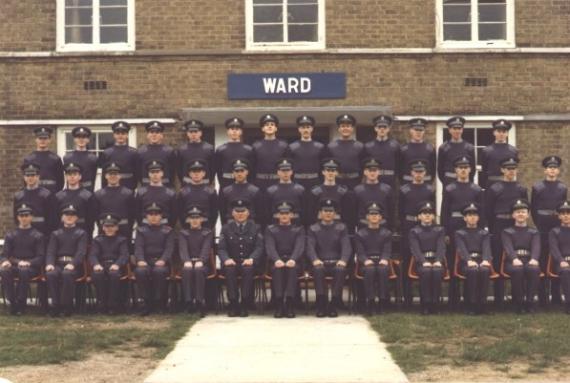 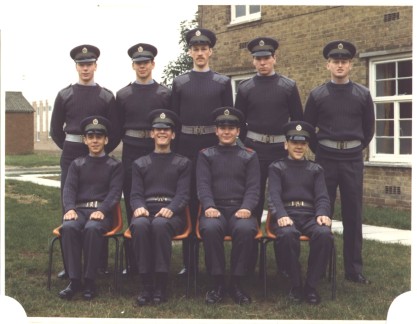 Off duty time was non-existant in the early weeks and only slightly more as time went on. The NAAFI was a favorite weekend venue, weekday evenings being taken up with ensuring the block and our kit were up to standard. Later on we found the Half Way House, a pub on the A46 about a mile from the camp. We would walk down here (in uniform still - because you had too) and enjoy a beer or two. Often Keith's girl friend and her friends would come down by taxi, so we could enjoy some female company, something sadly missing from the camp (although in later years the Womens (WRAF) basic adult entry would also move to Swinderby). A photo during our more relaxed time (few though they were) in the NAAFI: 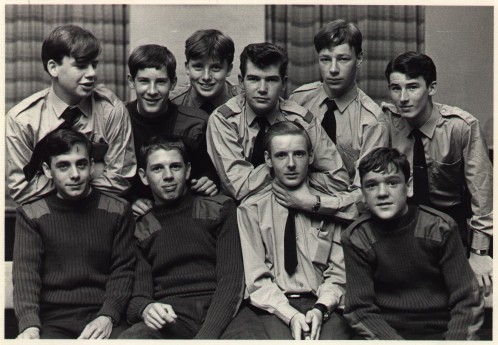 The end result, after 6 weeks, was a body of men working as a team and ready to be let loose into the RAF at large (well after some more training...) 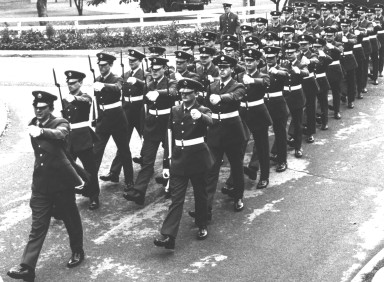