I worked in the Nimrod MR2 Simulator complex at RAF St Mawgan. It consisted of the Nimrod Dynamic Simulator DS (the flight deck simulator), the Maritime Crew Trainer MCT (The 'back end' simulator) and the 'cubicles' which were independent crew station simulators for the electronics crew. The crew stations simulated in the MCT and cubicles were the acoustics stations, radar station (Searchwater). comms, Elint/ECM and the Tactical Navigator's position. Although the DS and MCT were often used independently (the MCT for 'submarine hunting', and the DS for 'pilot training') they were capable of being connected together (electronically) to form the Nimrod Full Mission Simulator FMS. The DS pre-dated computer graphics and had a vertical airfield model over which a camera traversed. Also a 'bowl' of cotton wool in the centre of which the camera would sit to simulate transit above cloud. The transition between the two would be 'in cloud' as the picture was subject to white out. Of course the model airfield could be place 'electronically' anywhere!. The view from the cockpit was directly into monitors and part of the 'before flight' was to check the registration of these to ensure a lifelike view. Motion was provided via a T and A frame motion system driven by hydraulics. The MCT also had a basic motion system, but this was less often used. The DS simulation was provided by two ICL 4130 computers and the MCT used a suite of PDP 11 series computers. The software used was so classified that remote diagnostic support from Digital Equipment Corporation (DEC) was subject to a procedure that was lengthy and involved. I don't recall it ever being used, as the standard of training and the experience of the Eng Tech ST tradesmen was very good and all first line fault diagnosis was carried out successfully by them. Within the simulator complex there was also a suite to allow playback of the mission. This would display aircraft and submarine tracks and the actions of the crew in real or quick time to assist in the analysis of the mission and to see if things could have been done better.

The Nimrod is of the comet family (the first jet airliner) and had a long and distinguished career. In addition to the Maritime Role (MR) aircraft based at RAF St Mawgan and RAF Kinloss, there was a R1 variant at RAF Waddington to provide ELINT capabilities. 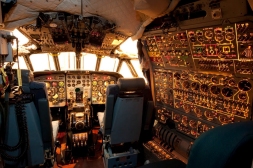 The MR2 was a formidable submarine hunter, it's long endurance and electronics fit meant that there was nowhere to hide for a submarine. The MR2 had a range of sonar buoys on board and these were dropped from the back of their aircraft through special tubes. This allowed the buoys to be programmed manually before dispatch. Varying from the simple bathythermal buoy through to the CAMBS bouy. The bathythermal buoy would lower a probe to measure sea temperature (some 800m in 10 minutes) - why? because there would often be a layer of temperate inversion and beneath this layer was an ideal submarine hiding ground. The inversion layer would bounce sound back to the seabed rather than allowing it to reach the surface where ships may be listening. Of course there were ways to defeat that, passive buoys, such as the Jezebel, it would be dispatched and they would lower a microphone to below the inversion layer and listen. The sound would be transmitted back to the Nimrod where several acoustic operators could listen in. They had very high resolution monitors and printers (that burnt the image onto special paper, with high voltage styli) and a good operator could identify submarines by the graphical representation of the submarine sounds. Both these buoys were great as the 'hunted' had no idea there was someone around listening. Multiple buoys could be deployed and triangulation used to plot the submarine position. Use of the Magnetic Anomaly Detector MAD would then pinpoint the submarine due to its metal hull distorting the earth's magnetic field. The MAD was fitted at the very rear of the Nimrod in what was called the MAD boom. The CAMBS buoy (Command Activated MultiBeam Sonobuoy) was a buoy that could send out a 'ping' to accurately position the submarine by sonar. By the time a submarine heard this ping, it was too late, a depth charge would be on the way.

The Nimrod was also equipped with the Searchwater radar. This was a high tech' radar that had an additional display mode that could provide a silhouette of the vessel being targeted. The definition was so good that vessel types could be identified way before visual range. The radar was also particularly good in rough seas, where a lesser radar would be confused by echoes from wave peaks. It was continually enhanced and become one of the first airborne 'colour' search radars. There was also a communications station and the operators primary role was contact back to base on HF and often sending pre-prepared messages automatically via a paper tape reader, and also with a morse key if things got bad!. There was an electronic counter measures fit. Originally a vary basic piece of equipment along side the MAD display, that needed extremely experienced operators to asses what was being received, and later a more modern computer based equipment, known as Yellow Gate, that would identify any received signal instantly. This provided useful intelligence in it's primary mission role, but also as to likely threat to the Nimrod itself. 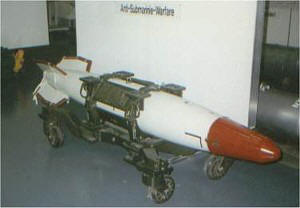 The MR2 was capable of carrying the B57 nuclear depth charge. (The B57 is a lightweight multi-purpose nuclear bomb that can be used as a nuclear depth bomb for ASW. Its yield is in the sub-kiloton to 20 kiloton range. Of the 1600 B57s in the U.S. arsenal in 1990, approximately 825 are anti-submarine versions for delivery by U.S. and NATO naval aircraft (Dutch NP-3 Orions, U.K. Nimrods, and Italian Atlantics). It can be delivered by carrier-based S-3A/B Viking jets and SH-3D/H Sea King helicopters, A-6E and A-7E attack aircraft, as well as land-based P-3 Orion maritime patrol aircraft." - It was 3 m (9 ft 10 in) long, with a diameter of about 37.5 cm (14.75 in). Basic weight was approximately 227 kilograms (500 lbs). Some versions of the B57 were equipped with a parachute retarder (a 3.8 m/12.5 ft diameter nylon/kevlar ribbon parachute) to slow the weapon's descent, allowing the aircraft to escape the blast (or to allow the weapon to survive impact with the ground in laydown mode) at altitudes as low as 15 m (50 ft). Various fusing modes were available, including a hydrostatic fuse for use as a depth charge for anti-submarine use.)

The nuclear depth charges were stored in a special area at St Mawgan as one of the US Navy's principal weapon storage sites (Joshua Handler and William M. Arkin, Nuclear Warships and Naval Nuclear Weapons 1990: A Complete Inventory, Neptune Papers No. 5, Greenpeace International, 1990: "The U.S. Navy has 18 principal nuclear weapons storage sites in the United States and overseas. Most are located near major naval stations for support of ships and aircraft. One of which is the Naval Aviation Weapons Facility, St. Mawgan, United Kingdom, which stores B57 nuclear depth bombs for use by U.S. and Dutch P-3 Orion, and U.K. Nimrod aircraft.). This facility was used by the US, the UK and the Netherlands as revealed in a released parliamentary document signed by Harold Wilson. Because these nuclear or 'special' weapons were US weapons the facility was guarded by the US Marines. 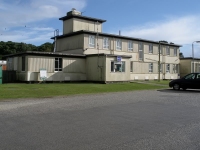 I can neither confirm nor deny the above, as I did sign the Official Secrets Act, and that probably still holds me to account all these years after my service.

We lived a little way away from the camp at what was another RAF base, RAF St Eval. Although the airfield site still had radio antenna installed for communications, it was a primary married quarters site for RAF St Mawgan. It had it's own Post Office and NAAFI as well as a thriving thrift shop and community centre including a bar and bowling alley. A large sports field was available and was often used by US marines who were also stationed at RAF St Mawgan. As a guard commander I would sometimes have to perform that duty at St Eval where we were based in the community centre and patrolled regularly around the married quarter site. It was not a fenced off area and thus was open to the public.