After my 6 weeks square bashing at RAF Swinderby, AC (aircraft man) Allan Kissack was off to the seaside! RAF Locking, a stone's throw (well actually a pretty good walk!) from Weston-super-Mare.

People pay good money to come to Weston, and it is here I found myself for 14-months, and being paid for the pleasure! Well ok, it wasnt all pleasure, although we could visit the town at weekends and without our uniforms which was a bit of a shock after Swinderby. During an arrival briefing on what was expected of us etc. we were told to stear clear of the Three Queens public house in Weston - apparently RAF types were not welcome and might get beaten up. So, for our course, it became our favorite drinking hole in Weston. Never any trouble and I wonder to this day whether the warning was a bluff to steer us there! 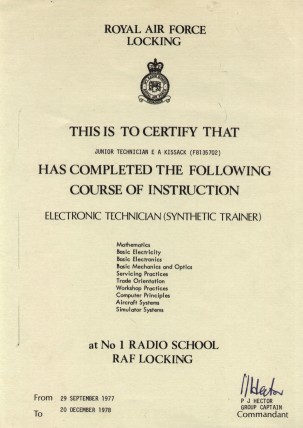 Eng Tech ST, as it became, was my trade - Engineering Technician Synthetic Trainers. A synthetic trainer is the name that those in high places gave to the flight simulator. I never understood why they chose that phrase, but it is true that the trade did not just deal with flight simulation but also other avionic simulations.

RAF Locking consisted of nicer (when compared to Swinderby) accommodation, and 2 airmens' messes (one of which, the threepenny mess seemed plagued with cockroaches - not very appetising as you queued for dinner). A NAAFI, a big parade square (no getting away from that square bashing here) and several training blocks.

Apparently RAF locking was part of the aircraft building industry in the war and it was rumoured that the very wide road to Weston was to facilitate the movement of completed aircraft to (the now) Weston airport. On the camp then, was several old aircraft hangers. These became training blocks 1T, 2T,3T and 4T. A more modern build was 5T block. These are where the training took place. 1T was for basic mathematics and other 'schooly' type of courses. It was more enjoyable than school though, because the subjects were taught with a relevance to the job being learnt. 2T (or was it 3T - I forget) was all about learning electronic skills. Soldering, and building projects, fault finding and fixing - satisfying stuff.

Moving on after many months to 4T was where the trade training began. Radar principles, how monitor's worked, servo's and synchros', theory of flight, computers and simulation. The training simulator's were:

a. A containerised Gnat simulator that pre-dated digital computing and was fully servo/synchro driven. Imagine a typical lorry container and then set aside a cockpit area and a further area for an instructor to sit - the rest was wall to wall electronics. An amazing bit of kit, and though I didnt excel at servo/synchro theory I appreciated the magic that made this thing work.

b. Nimrod Flight Deck. It was reported that this simulator, purchased alongside those a RAF Kinloss and St Mawgan, was destined for Malta - a project that never came to fruition. It however provided an ideal modern digital computer driven simulator for trade training.

It was not all electronics though. PT still featured highly, although not to the extent of Swinderby. Swimming was an option and this involved a bus ride to a local pool. Marching was still required and expected - to and fro to work/lessons and for the inevitable parades. The nasty corporal and sergeant was replaced with a SNCO (senior non-comission officer - Sergeants, Chief Technicians and Flight Sergeants) who seemed genuinely caring. Not all the camp SNCO's were so nice (not that we expected it!) and I remember one occasion on apologising to a chief (Chief Technician) for something trivial, only to be almost strung up as he was really a Flight Sergeant, and I hadnt noticed. His verbal tirade was typical of the (often true) SNCO stereotype.. 'What do you mean chief? Have I got feathers growing out of my....' and so it went on. Oh yes, Locking, like Swinderby was a rich learning experience.

Whilst there we suffered one of the areas worst snow falls ever. I remember that lessons were called off and instead as a course we were issued with shovels and given a map of the roads we had to clear - forces training cannot be critisied for being to narrow! It was fun jumping out of a two storey barrack block into snow drifts though!

Also on the camp were various foreign nationals. They were here for training (as well as flight simulation Locking, as No1 Radio School, trained radio and radar technicians) and it seemed they were well paid as we often saw the discarded boxes of the latest stereo equipment that they, rather than us, could afford to buy. I cant remember exactly where they were from but it was the middle east.

My course was DST10 (Direct entry Synthetic Trainers No. 10). The trade was relatively new, DST1 had yet to pass out of training whilst we were there. The work (simulator maintenance) was being carried out by aircraft tradesmen from other trades pending the direct entry tradesmen completing their training.

Weston-super-Mare, or Weston-super-Mud as we liked to call it (the sea seemed to go out an awful long way and it was not untypical for people to require rescuing from the mud at low tide) was, and probably still is, a great seaside town. Brean Downs a promontory to the south, great for a walk and to look around the surrounding area. A spectacular venue during an airshow to look down on the Red Arrows doing their bit. Beaches and villages abound offering a great time to the young, free and single airmen of Locking. (the simulator trade was men only with a minimum 12 year engagement - although much later it was opened up to females, although I understand there was only one)

And so after 14 months trade training, we passed out and were promoted to Junior Technicians (JT) and each of us went our seperate ways. My destination? The sharp end! Harrier GR3 Simulator at RAF Wittering.