Eddie's death just before Christmas in 1972 was a shock to the family. He had been out for a walk in town and didn't return. A search did not locate him until the following morning where his body was spotted and recovered from the harbour 20 yards on the Stone Bridge side of the Swing Bridge, Douglas.

The sudden death was referred to the coroner who recorded the cause of death as "Heart failure due to multiple injuries, there being insufficient evidence to show how the deceased came to be in the water". It is not clear whether these injuries were a result of his fall onto the bed of the harbour or something else. 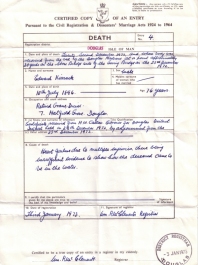