Edward was born (1896) a twin of Clarke, sons of Thomas and Isabella. He was from a large family and was brought up by relatives in the south of the Island. Although born in Maughold, we do not find Edward in the 1901 Maughold Census for that region, because he moved at a young age to be brought up by his aunt Annie Costain at Ballakilpheric. He appears in the Rushen 1901 census at Cronk-e-Dhooney in the family of William (aged 62) and Anne Costain (57), along with their children Wilfred (20) and Annie (16). Eddie was very fond of Annie Costain who brought him up well. During WWI he sent her postcards from the front, and posted an in memorandum in the paper on her death,

Eddie served in the Army Service Corps (Private DM2-164637) during World War I and after that worked on the Mannin, a floating dredger that worked around the Island keeping the harbours free of silt. (Learn more of his war here).

The family lived in Douglas, latterly at 7 Hatfield Grove, Douglas and I remember visiting him there and seeing him use his skill in whittling to make me a wooden boat and seeing on his mantle piece a bullet brought back from his war experiences.

He enjoyed fishing and one of the favoured spots was Sloc (marked as stacks on the OS map), This entailed a lengthy descent down the cliff face to a flat topped rock where Ballan Wrasse of good size could be caught. I remember fishing with him, my Dad Roy and Uncle Ian on the rock and being amazed at the fishing we enjoyed. Returning to Sloc in the 1990's fear got the better of me as I attempted to find the way down again - my Granddad was obviously made from sterner stuff. 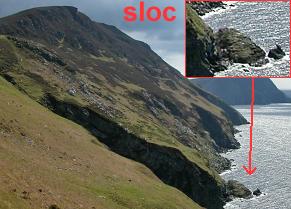 Eddie died accidentally three days before Christmas 1972 (22 Dec 1972) and his memorial headstone describes him as a 'Gentle Man' which from my memory is very apt. He is buried with his wife who died 23 Aug 1976, in Douglas cemetery.