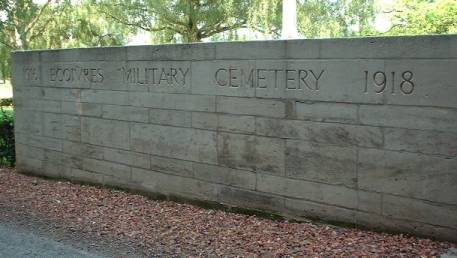 Mont St Eloi (map) is a village in the Department of the Pas-de-Calais, 8 kilometres north-west of Arras. Ecoivres is a hamlet lying at the foot of the hill, to the south-west and about 1.5 kilometres from Mont St Eloi.

The ruins of Mont-St.-Eloi gave the Canadians a powerful observation post before the Vimy attack and, with their headquarters nearby, the 1st, 2nd and 3rd Canadian Divisions used this cemetery throughout 1917. Many units brought back their dead from the front and buried them here. The cemetery, of 8374 sq meters, now contains almost 2000 1914-1918 war burials, including 828 Canadians.

The Cemetery is on the D49 road. It is situated on the East side of the village, a little South of the main D341 road from Arras to Divion. 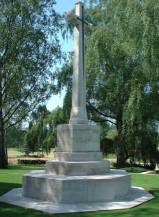 This cemetery is really the extension of the communal cemetery, were the French army had buried over 1,000 men.

The 46th (North Midland) Division took over the extension with this part of the line in March 1916, and their graves are in Rows A to F of Plot I.

Successive divisions used the French military tramway to bring their dead in from the front line trenches and, from the first row to the last, burials were made almost exactly in the order of date of death.

The attack of the 25th Division on Vimy Ridge in May 1916 is recalled in Plots I and II. The 47th (London) Division burials (July to October 1916) are in Plot III, Rows A to H, and Canadian graves are an overwhelming majority in the rest of the cemetery. George lies in row 4b in grave 14 (see plan below). To the left of his grave is a casualty from 15th January and to the right several loses from 21st January that year. Plots V and VI contain the graves of men killed in the capture of Vimy Ridge in April 1917, comrades of George who also gave their lives.

After the Armistice, the graves of eight men of the 51st (Highland) Division were brought in to Plot VIII, Row A, from nearby Bray Military Cemetery.

Ecoivres Military Cemetery contains over 1,720 Commonwealth burials of the First World War. There are also 786 French and four German war graves. The cemetery was designed by Sir Reginald Blomfield.

(above) the location of George Kissack's grave.