The story of James Henry Kissack at Delta Marsh, originaly posted in 2002 and updated on 4 Oct 2010. Kindly written by Gerry Kissack. 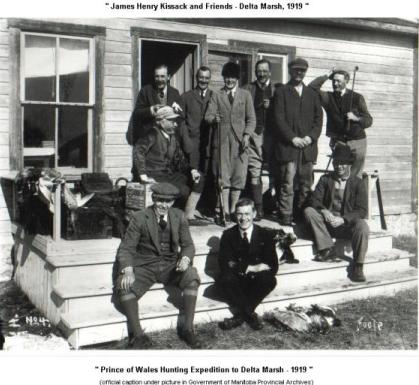 The Kissack focus of this group picture is the right quarter panel. The gentleman standing top right with the wooden shaft golf iron ashoulder is my Grandfather, James Henry Kissack, Manager of the Lakewood Country Club, and seated in front of him is his eldest son, my Dad, Walter Henry Kissack. This group have apparently just returned from a morning hunt for waterfowl, the trek into the marshlands very likely guided by my Dad, then 20 years of age, for Dad knew those waterways through the western Delta Marsh as he did the back of his hand.

Granddad Kissack would have managed the days events, and Mary, my Grandma, his Bride of 22 years would have prepared a table fit for the Guest of the Day, Edward, Prince of Wales, the other focus of this picture.

Those reading this description will note that the official caption under the picture that hangs in the Government of Manitoba Archives Building reads "Prince of Wales Hunting Expedition to Delta Marsh - 1919". The first time I viewed this photo was in the fall of the year 2001 when visiting the Archives of the Province of Manitoba in search of historical records pertaining to the establishment of homesteads in Canada by my Grandfather, James Henry Kissack and his younger brother Wilfred circa 1904.

On approaching to within a few feet of the picture my eyes were immediately drawn to the gentleman in the top-right corner of the picture, the man with the old golf iron over his left shoulder. I recognized him immediately as my Grandfather, James Henry Kissack, who had, for a period of approximately 40 years managed The Lakewood Country Club in the Delta Marsh just northeast of Westbourne Manitoba. Although this picture was labeled as having been taken in the year 1919, and I was not born until 1933, and further, that my earliest recollection of Grandpa Kissack was about 1937 or 1938, almost twenty years after this picture was taken, there was absolutely no doubt in my mind that this was a picture of my Grandfather, taken with a group of members and/or guests at "The Club".

My focus to that point had been entirely on Grandpa Kissack and knowing that if possible, I would really like to obtain a copy of this picture, I read the inscription on the brass plate mounted on the frame of the picture to discover that the official title of the picture is:

The next day, I returned to the Archives of Manitoba and to validate my conviction respecting those identities and those of some/all of the others, requesting that the Archivist(s) search their records to determine if they had a record of the names of all the persons in the picture. They did not have such a record. However, in the interim, I had made some comparisons of the facial characteristics of Dad and Grandpa sufficient to satisfy myself that these two gentlemen were, in fact James Henry Kissack, my Grandfather, and his son, my Dad, Walter Henry Kissack.

James Henry Kissack, born 8 May, 1874 would have been 45 years of age at the time of this picture, for the picture would have been taken, probably in October of 1919. The first mental picture I can recollect of my Grandfather would be about eighteen or twenty years after this picture at which time I would have been but four or six years of age, and while I've therefore had to imagine in my mind's eye what he would have looked like that long before we met, there is no question in my mind that this is he. 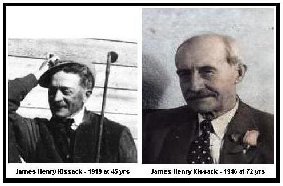 As "proof" to myself, however, I cropped the portion of the picture showing Granddad's head and shoulders, and beside it attached a picture of him taken December 31, 1946, in my presence on occasion of my Grandparent's 49th Wedding Anniversary and dispatched copies of the photographs and "crops" of Granddad to two professional photographer friends, one David Williams of Colwyn Bay, Wales, and another Gord Lovell of North Vancouver B.C. for their confirmation. Both have, in their professional opinion validated my convictions as to the identities of James Henry and his eldest son, Walter Henry Kissack, my Dad, who is seated at his Dad's feet, Dad himself but twenty years of age at the time this picture was taken. I should share as I write, that it was not until I picked up my print of the picture that my focus broadened from keying upon Granddad Kissack to include the others that I focused upon Dad, wondering why I hadn't done so earlier. Also appearing on the left is the image of Dad, cropped too, from this group picture, and another of him, later in life. Amazing! 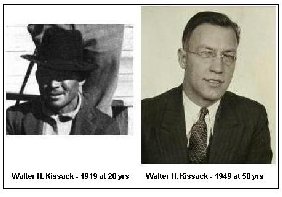 I'm prompted to share now, the picture from the imagination of my minds eyes and ears of a "might-have-been conversation", Granddad Kissack to one of the others in attendance that October day, commenting on the day's activities and the participants. One of his comments might have been - "Yes, Walter led the Prince of Wales to a successful hunt today - but then, he's our family's Prince of Wales, having actually been born in Colwyn Bay, North Wales just prior to the turn of the century, back in October of 1899. Edward, on the other hand, was born at Richmond, in Surrey, England, not in Wales, as was our prince - Walter, who was Edward's leader for the hunt today. Actually, I wouldn't be at all surprised if it was Walter who took those ducks today, but we'll never know, because if it was so, our Walter would take that information with him, to the grave."