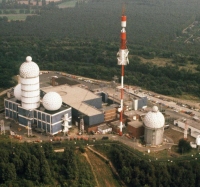 Roy Kissack served at T-Berg in the 1970's. Stationed at RAF Gatow the route to work required a bus or car journey to Teufelsberg - situated on a hill and reputably built of rubble that resuled from the bombing of Berlin in world war 2. The establishment was a multinational eavsdropping station with UK and USA forces making up most of the staff. For the Royal Air Force, it was known as part of 26 Signals Unit (parented at RAF Gatow, which aslo had a distinct signals complex on the airfield). Roy was a Flight Sergeant in the UK's Royal Air Force and his trade was 'Radio Operator Telegraphist (ROT)' indicating his specialist in morse communications.

An author (Phil) records on his website "Teufelsberg (Devils Mountain), is the highest place in Berlin; ideal for a listening post. It was built after World War two from the rubble of 400,000 bombed buildings piled on top a a Nazi-era military technical college that was built by Albert Speer, Hitlers principal architect. The college, being Nazi architecture, had been intended to be knocked down after the war, but was too sturdily constructed, so in a sense, Speer dictated where the Field station was eventually built. It was accessed via a winding, climbing road from the Grnewald in the British sector of West Berlin, steep enough so that the trick buses groaned in low gear while climbing to the top. I used to sit on the bus and stare into the vegetation, occasionally getting a glimpse of a piece of masonry or shattered column where the dirt covering it had eroded away, a somber reminder of how much destruction had occurred in this place 40 years before. 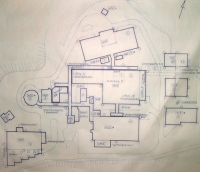 What we did on the Hill or T-berg was quite simply industrialized spying on a massive scale. T-Berg was one of the Cold Wars premier ELINT (Electronic Intelligence) stations. Inside, hundreds of technicians and operators maintained a 24-hour-a-day watch on almost every facet of East German and Soviet communications in Eastern Europe- telephone, fax, data, you name it. Personnel rosters for the other side were maintained and annotated, linguists in almost every Eastern European language resided on the Hill, listening to and transcribing tapes that the operators had captured. Techs, such as myself, maintained all the equipment used for this huge effort. A large communication center and Operational communications center (OPSCOMM) was maintained there as well. Teletype machines with adjustable-speed drives could be hooked up to radios to print out message traffic in the encrypted coded groups, which would then go to NSA reps for decryption. Morse-code specialists listened to Dits and Dahs until some of them quite literally went mad.

On the Hill were hundreds of radio receivers, huge adjustable satellite dishes on equatorial and azimuthal mounts, antenna systems galore, and enough RF cable to cross the Atlantic Ocean and come back. I tried to count just the Teletype machines once, and stopped somewhere after 500.

It was all super-secret then, although anyone with half a brain knew what was going on up there with all the obvious antennae and the American soldiers from the Intelligence and Security Command, and the large proportion of Russian and German-speaking GIs assigned there. Nowadays its all done by computer, Im sure, but I dont think that Ill ever consider that half as romantic as actually going somewhere and doing it the old fashioned way. We had constant alerts and drills to go out and stand guard, even though the reality was that the opposition knew what we did there as well, and there was an entire Soviet division four miles away tasked to removing us first if the the balloon ever went up in Europe. Our first physical indication of the arrival of hostilities would be accurate, heavy artillery fire or a tactical nuke landing on us, and we knew it."

Google T-Berg or Teufelsberg and you are likely to find a variety of pages. There are several pictures of the site too, but most of them, not unsuprisiblgy, are taken after the forces have left. However it is intersting to see the shell of the building, as photographs while it was operational would obviously be forbidden.