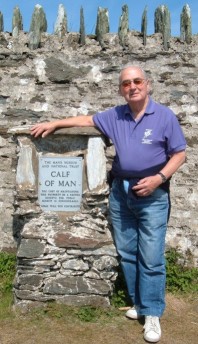 It was with sadness that we announced the death of Manxman Edward Roy Kissack on 16th October 2009. A much loved husband of Rita, dad, brother, granddad, great-granddad, uncle and friend. Roy's funeral service was held at Ruskington Parish church on Thursday 26th November 2009 after a long and frustrating post mortem. The was followed by cremation and then a reception at Potters bar in Ruskington.

The church was full and we are grateful to those who took time out to pay their respects to Roy and at the same time supported us, his family. We tried to talk to you all at Potters but there would have been some we missed and some that were unable to join us there - we are sorry if we were unable to extend our personal thanks to you, but we are truly grateful. It was great to meet with colleagues of Dad's from as far back as 1962; to meet people who served with Dad in the RAF; to put faces to names of many athletic officials from around the country; to reunite with family and to meet his local friends. It was a sad day, but one that we feel paid justice to a wonderful man and to do that took all of us that where there - thank you. Someone asked me about the flag on Dad's coffin - it is the Manx flag. 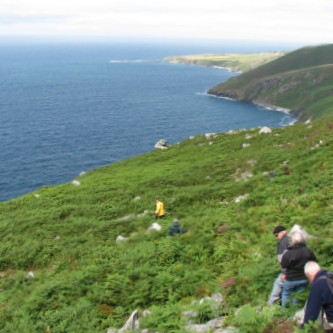 The music played in church was the Bee Gees rendition of Ellan Vannin (meaning Isle of Man in Manx) - an alternative version can be heard here.

In accordance with his wishes, Roy's ashes were scattered near Sloc in the Isle of Man on 16th July 2010.

After a distinguished career in the Royal Air Force of 32 years, Warrant Officer Kissack MSM, GSM (South Arabia), LSGCM (and bar) worked for the civil service for a further 10 years before retiring. Roy had been an athletic official for many years. In his retirement he was particularly active in travelling the country to various meetings, both local events and international, adult and youth, able bodied and disabled. It was of such importance to him, that sometimes, even family social events had to be moved because of a clash with an athletics event. 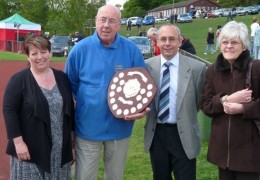 On 9th May 2010 we had the pleasure of presenting the "Roy Kissack Memorial Shield" to Frank Gorman for his valuable contribution in the support of British Athletics. Frank had been nominated and chosen, by Derby Athletics Club, as the athletics official worthy to receive the award for 2009. It is hoped that the shield will be presented annually to an athletics official so as to encourage this important element of service to British athletes.