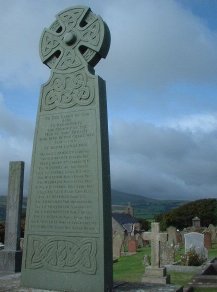 In 1923 the Manx Quarterly publication reported on Great War Memorials including that of Maughold.....

In honour of fifteen men from the parish of Maughold who gave their lives for their country in the Great War, a memorial, in the form of a Celtic Cross, has just been erected in the ancient churchyard, and the formal ceremony of unveiling by the Governor, and dedication by the Bishop, was performed on Thursday . The cross is a beautiful and massive piece of work, weighing about two tons, and standing sixteen feet high, and is made of green slate from the famous Buttermere quarries, in the Lake district - the same stone as used in the famous Ruskin memorial on the shores of Lake Coniston. It is mounted on three steps, made of rock from Maughold Head, and its position enables it to be seen for a considerable distance out to sea. The runic patterns which cover a large portion of its surface were designed by Mr PMC Kermode, and the sculptor is Mr Edward Christian, T.C., of Ramsey.

The service was participated in by the Vicar of Maughold (Revd. EA Stafford-Young, M.A.), the chaplain of Christ Church, Dhoon (Revd. R. Fergusson), the Revd. MAV Harrison (Ramsey), the Revd. EC Palmer, superintendent Wesleyan minister, and by the captain of the parish, Mr JR Kerruish, M.L.G., J.P.

The names inscribed on the memorial are as follows :-