The Ellan Vannin was originally built as an iron paddle steamer and named Mona's Isle [2]. Constructed in Scotland by Tod & MacGregor at Meadowside, Glasgow in 1860 at a cost of 10,673UKL. She had a gross tonnage on building of 339 tons, top speed of 12 knots and an overall length of 63.09metres. She was launched on 10 April 1860.In 1883 the Mona's Isle [2] was converted to a twin screw steamer by Westray, Copeland and Co. of Barrow and renamed Ellan Vannin on 16 November 1883. Ellan Vannin is the Gaelic for "Isle of Man". 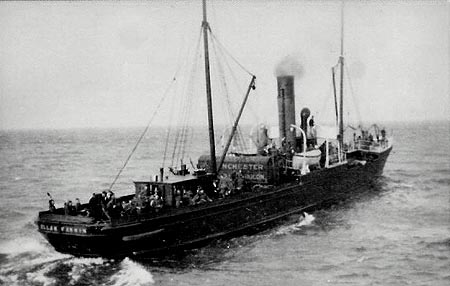 After conversion there was a small increase in tonnage to 375 tons and speed increased to 12.5 knots. The Ellan Vannin could carry up to 300 passengers (50 1st Class) and had a usual crew of 14. By the time of her loss the Ellan Vannin was one of the smallest and oldest members of the IoMSPCo fleet. In her latter years many of her sailings were from Ramsey in the north of the Isle of Man to Whitehaven, Liverpool and Scotland. Despite her small size and age she was considered to be a strong ship and often put to sea in many a storm that had caused other ships to run for the shelter of Ramsey Bay.

On the morning of 3rd December 1909 the SS Ellan Vannin of the Isle of Man Steam Packet Co. left the Island at 01.13 bound for Liverpool. She was carrying 15 passengers, 21 crew plus mail and 60 tons of cargo. In command was Captain James Teare of Douglas with 18 years of experience. At departure the weather was not particularly rough, and though the barometric pressure was falling, the captain did not expect any trouble. As the passage progressed the weather rapidly deteriorated and by 06.35 when she arrived at the Mersey Bar the wind had increased to storm force 11 with 20 foot waves. She foundered between the Mersey Bar and the Q1 buoy on the Mersey approach channel. She filled with water and sank by the stern. All passengers and crew were lost.

The song below is believed by many to be a traditional song from the Isle of Man, it was in fact composed by Hughie Jones, and first performed by his group "The Spinners" from Liverpool. The Spinners enjoyed considerable success during the 1960's and 70's but are now disbanded. Hughie Jones is still performing though and has several CD's available.

Snaefell, Tynwald, Ben My Chree
Fourteen ships had sailed the sea
Proudly bearing a Manx name
But there's one will never again
Oh Ellan Vannin, of the Isle of Man Company
Oh Ellan Vannin, lost in the Irish Sea

At one a.m. in Ramsey bay
Captain Teare was heard to say
"Our contract said deliver the mail
in this rough weather we must not fail"
Oh Ellan Vannin, of the Isle of Man Company
Oh Ellan Vannin, lost in the Irish Sea

Ocean liners sheltered from the storm
Ellan Vannin on the wave was borne
Her hold was full and battened down
As she sailed towards far Liverpool Town
Oh Ellan Vannin, of the Isle of Man Company
Oh Ellan Vannin, lost in the Irish Sea

With a crew of twenty-one Manxmen
Her passengers Liverpool businessmen
Farewell Mona's Isle farewell
This little ship was bound for hell
Oh Ellan Vannin, of the Isle of Man Company
Oh Ellan Vannin, lost in the Irish Sea