The Mannin was a steam powered dredger that did sterling work in keeping the harbours of the Isle of Man free of silt. It was replaced by a more modern ship and was renamed Mannin2. After being replaced it was sold and went to the mainland with what looked like a sad ending. The replacement ship can often be seen (in the late 1990's) in Padstow Harbour (Cornwall) as it too has moved to the mainland. There is some discussion as to the wisdom of these moves as the various harbours still require clearing. 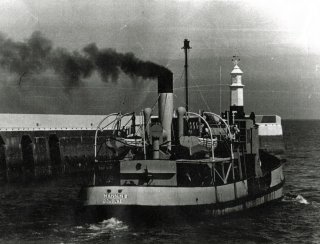 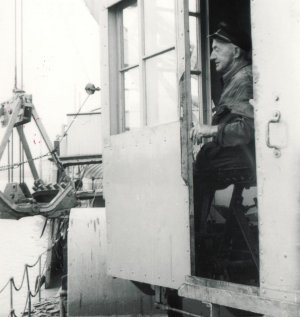 (Eddie Kissack in the cab aboard Mannin)

I was born Edward Roy in 1934, and at that time we lived in Drinkwater Street before moving to Hatfield Grove.

I believe that Dad worked for the Harbour Board before becoming involved with the Mannin, in that he was the "timekeeper" for the building of the "Viaduct" a covered walkway that joined the King Edward and Victoria piers.

In 1936 he went to Glasgow apparently to receive instructions on the use of the crane and grab, and this was the same year and dock yard that the Queen Mary was launched. I recall many years later, Dad showed me a piece of mahogany wood which apparently came from the Captains table.

I seem to remember from what he told me that the Mannin was delivered by a Scottish crew, as the Manx seaman did not fancy sailing a flat bottom boat with a big hole in the middle and a large crane amidships.

Most of the dredging work took place in Douglas harbour keeping the deep berths open for the numerous IOM Steam Packet boats plying their trade between the "mainland" and our Island.

They were also detached to far away places like Laxey, Peel and Ramsey, to keep their Harbours open, and if they were lucky and could afford it, they managed to get home to Douglas on Wednesday nights by bus, train or electric railway.

As a boy the Mannin fascinated me, in that a boat with huge doors under the keel covering the hopper could open and release all the sand and mud without sinking!!!

I recall it's battleship grey profile with plumes of black smoke emerging from its' funnel, very slowly leaving the harbour to beyond the south of Douglas Head to deposit the mud etc. 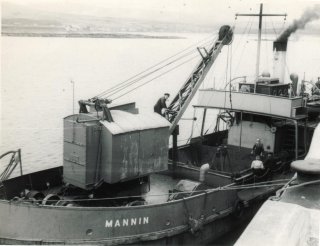 When I was a bit older, Dad let me onboard and I was taken below to see their very cramped living quarters with 5 bunks (there was no discrimination between Captain and crew), the damp conditions, as there was nothing between the hull and the living area which was always cold even in the summer. I often observed them putting fire bricks in the coal fired oven to use as warmers in the bunks instead of water bottles. Mugs of tea were always on the go, and I recall the comradeship and friendly nature of all the crew.

My finest memory of the Mannin was Dad telling me that they (the Mannin crew) on returning from one of their detachments at Peel, and with good weather expected, would head south and pass through the Sound. I recall that magic moment seeing this old grey flat bo ttomed boat, black smoke pouring from the funnel, probably going flat out to defeat the currents and lit up by the sun, a wonderful site. (How I got to the Sound is beyond me, I might have cycled there with my brother Allan and sisters Anne and Monica, or gone by train to Port Erin and walked, as the family had no car.) 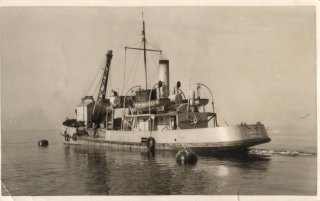 When at home in Douglas, Dad very often came home with the fruits of the sea from the many fishermen that he knew, flounders, crab, lobsters, herring and queenies, these to our poor family were like a gift from heaven, herrings grilled on two pokers over the open range, those that were left were pickled for later.

I remember him telling me of how he was thanked (rewarded) by a visiting lady tourist, who on alighting from one of the boats, dropped her handbag overboard, and on the following day, or when the boat departed to the mainland he used the grab and recovered her purse.

A more serious event however befell him in that looking into the hopper to assess the spread of the mud he sneezed and lost his teeth, and I don't think that this time he used the grab to recover them!!!

The memory of my Dad, at sea, was that he was always attired in overalls,with a captains type hat perched at an angle on his head, his favourite pipe in the corner of his mouth with the lovely smell of Robin Redbreast tobacco, a piece of cotton waste in his hands smelling of oil, and the all pervading smell of the coal smoke from the funnel, but I am sure that he enjoyed his time on the Mannin and I believe that when he retired in 1961 he lost the love of his life. 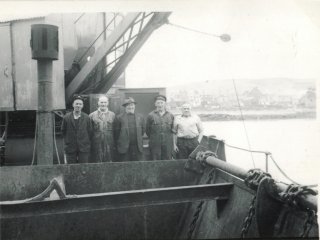 How sad the boat looks now in Ellesmere port, still in it's ever lasting battleship grey paint, an old lady now, born in 1936 and to this day still bearing the name MANNIN and apparently still available for "private operating" after a lifetime of over 35 years in the service of the Harbour Board.

A replacement Mannin in brighter colours, with a new crane and jib, seen in Padstow harbour a couple of years ago can never replace what I feel about my Dads Mannin for it was not only part of his life, but part of our family life too.

Catherine emailed me in 2011 with a photo of her Granddad,Joseph Albert Moore, who was captain on the Mannin for few years till his retirement in 1967. Here he is on the bridge: 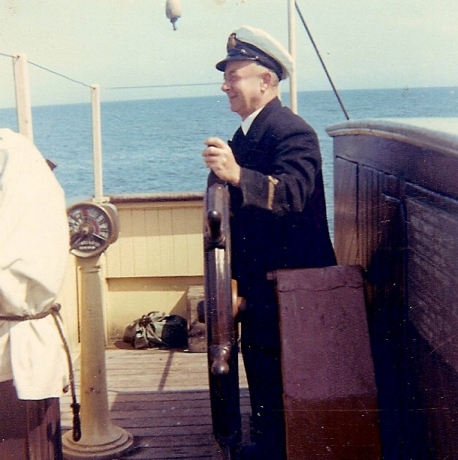 Editors note: It would appear that the steam driven "Mannin" had it's name changed "Mannin 2" in preparation for a new diesel ship to be called Mannin (see below sad postscript here. Jason Quayle built a great model of the Mannin (completed in 2005). See further down this page 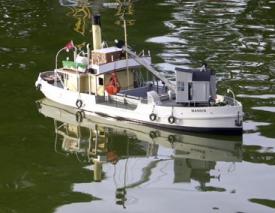 Whilst researching more details of the Mannin (the ship my Granddad worked on), my Dad and I discovered that it appeared that the Mannin we knew may have been a later ship 'Mannin 2'. This was very confusing, especially when in Padstow harbour we saw the 'original' Mannin that looked nothing like the Mannin we knew.....

Looking at photos, it looked as if the Mannin and Mannin 2 where the same ship! and yet the Mannin seen in the 1990's was neither of these. 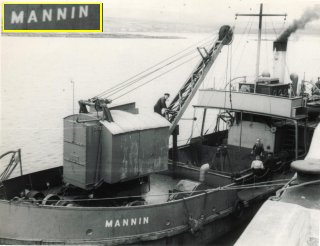 (Mannin with Granddad on board) 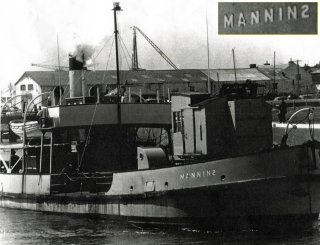 (Later picture of the "Mannin" as "Mannin2")

The explanation and solution to the mystery was provided by Captain Michael Brew, Director of Harbours, Douglas in February 2004.....

"There have only been two dredgers called "Mannin". When the original, steam-powered Mannin was replaced the Harbour Board wished to keep the name for its diesel-powered successor. There could well have been a period when the original "Mannin" was given the name "Mannin 2" so that "Mannin" could be transferred to the new one being built. The regulations governing the register of ships prevents 2 ships having the same name at the same time.

The original Mannin is the one that is at Ellesmere Port and its successor is at Padstow." 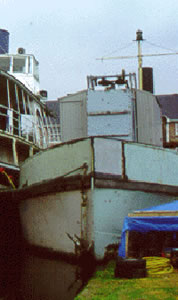 (original "Mannin" at Ellesmere Port - dredging days over!) and worse to follow.... 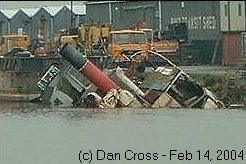 A sad postscript to the Mannin story is that within days of Roy writing his memories of the Mannin we hear via Manx Radio that she has sunk in Runcorn (Weston Point Docks). An internet search turns up these pictures (taken February 2004 and courtesy of Dan Cross)

Dan understands she sank on February 11, 2004. The vessel was laid up at the Ellesmere Port Boat Museum for many years, before being moved from there around 18 months ago. At the time there was talk of restoration, however, looking at the photographs one must come to the conclusion that no work was done. 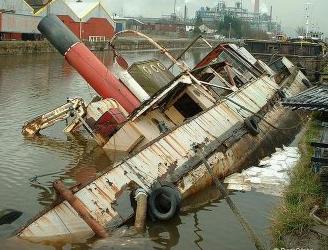 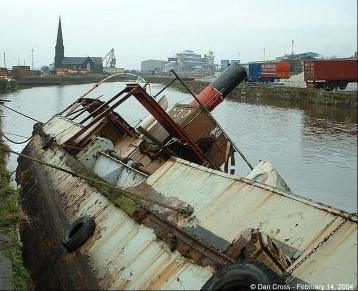 (in the shadow of a church.. is this to be the resting place of this great ship?)

A sad set of pictures indeed. We wonder what will happen to her now. Will her owner see fit to re float her, or will she rust away where she lays? Time will tell.

But our internet search also revealed a relatively recent picture of the Mannin under steam - a reminder of her working days in Douglas and the other ports in the Isle of Man... John Luxton writes: "It shows this classic little ship under steam and at work in Glasson Dock during the winter of 1980. One must hope that it is not too late to save Mannin."

In 2005 Jason Quayle completed a model of the Mannin. It is a really good likeness, and here are some photos: 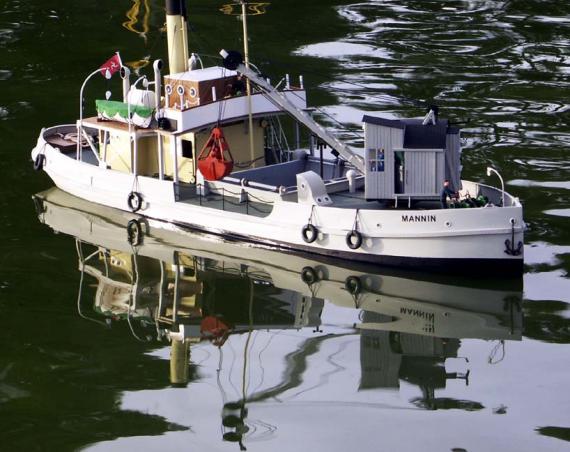 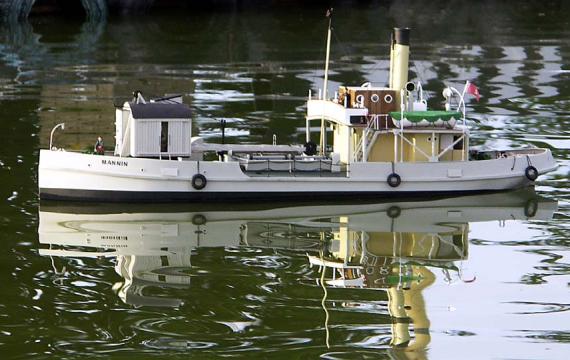 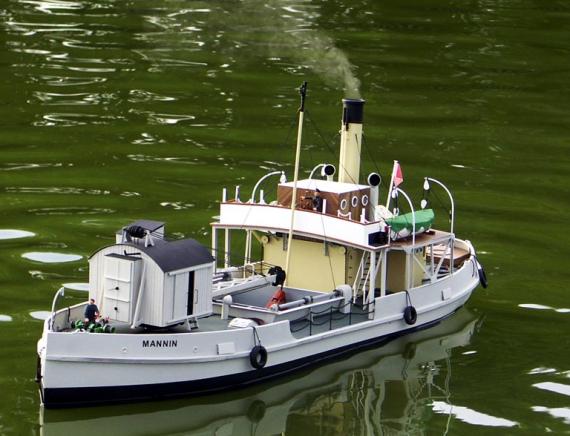 Lothar de Bruijn from Holland (httpd://www.historicalmodelships.tk) also builds models (static rather than radio controlled) and here is his Mannin: 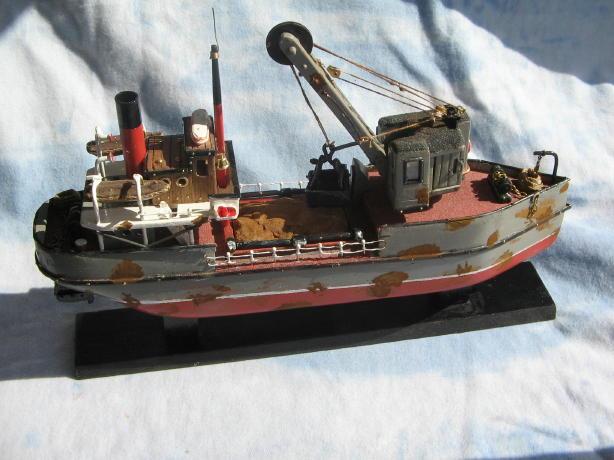 Viewing details for MANNIN in the Clydebuilt Ships Database