Fishing and the Bollan Cross

Let's go back to the late 40's and the early fifties when we were living in Hatfield Grove. When I, Alan and later on Anne, were deemed old enough we accompanied Dad on his rock fishing expeditions. That is where we learnt about the Bollan Cross. Walking from Rosemount to a path opposite the entrance to the Nunnery, we walked over the headland via the old rifle range to pass via the tram station, where the road and track had collapsed, and continued along the marine drive towards Port Soderick to arrive at Langness Beg. 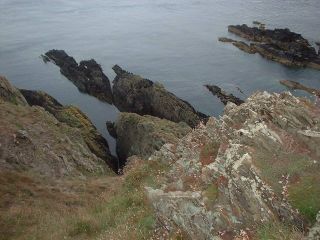 At first sight it looked impossible to climb down the cliffs to the deep gullies down below. Following Dad we arrived at the bottom of the cliff, turning round to be amazed that we had arrived safely after descending about 80 metres of sheer rock!!! (Ed - not fully appreciated on the photos above or below) We have been fishing there now for over 40 years and once you had learnt the way you never forget it !!!

So to the fishing, baiting with Lug worm and rods of over 12 foot in length, it was into the fish. The first wrasse nearly tore the rod out of my hands as the fish dived deeply to the haven of wrack. Finally catching one you had to be careful of the risen spikes along it's back and the ferocious front teeth.

Before returning home we cleaned and gutted the fish so if necessary Mum might cook it for tea. When preparing the fish for the oven, it was to be stuffed with sage and onions and baked. Whilst removing the head Dad pointed out the crushing machine at the back of the head, and told us about the "Bollan Cross".

The cross ended up later being boiled white in water, and it's significance to seafarers (Dad was working on the Mannin during this period) was, and I believe still is, a "good luck charm" to be carried by seafarers when at sea, in the belief that they then would not perish or drown at sea.

My Dad nearly always carried one in his wallet, and I certainly carry one with me when I go back home to the fishing.

To me it is something parculiarly Manx, if not Kissack. - The Bollan Cross is one of the sets of teeth belonging to a fish called the Bollan Wrasse (or Ballan Wrasse).

This fish is prolific in the Isle of Man and can be caught, from the rocks, all around the Island. Look in it's mouth and be suprised to see thick white teeth of the sort you might expect to see in a human mouth. The bollan wrasse feed on limpets and mussels, so require strong, chisel-like teeth to prise their prey off rocks and deal with the shells. They grow quite large on this diet, males reaching around 60cm and 3.5kg in weight. The Bollan Cross is part of that formidable crushing machine.

But what is this Bollan Cross all about?

Well, I understand that is was often removed from the fish (before eating), and kept a safeguard against drowning. On the Island where the the sea played such a major part in daily life and ecomony, it was a good luck charm for sailors and fishermen alike.

This particular Bollan Cross (above) is mine! 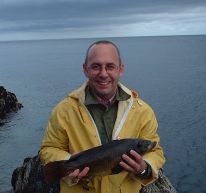 It belonged to a fish caught off Langness Beg that fought well and, later on, was enjoyed as tea by Karen and I (cooked by my Uncle and Aunt - experts in fish dishes!).

You can also get Bollan Cross as a charm for a charm bracelet - but only in the Isle of Man have I seen or come across it.

(The internet search engines are very quite on the topic. Although an Italian site records... "The wrasse feed on mussels and on crustaceans, including crabs and barnacles. For this purpose they have crushing teeth in their throats in addition to their normal teeth. The lower set of throat teeth are in the form of a cross and these teeth used to be carried by fishermen as a charm against drowning." )