Two Kissacks emigrate to Canada in 1904

Gerry Kissack writes in 2001 about his research into his ancestor James Henry (Editors note: Today, 2004, Gerry acknowledges that further research has revealed that changes are needed to this early account - watch this space!!)....... 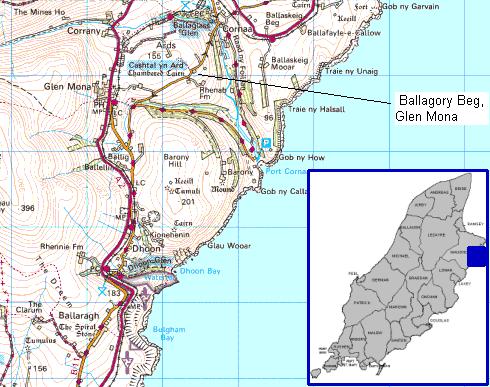 The eldest son, James Henry, had, c. 1896, crossed to Colwyn Bay, North Wales and obtained employment, it appears with the Pwll-y-Crochan estate, met and married Mary Williams from Llanfair Talhaiarn, a small village about six miles south-east of Colwyn Bay, and were at the time of their decision to emigrate to Canada, living at 11 Rhiw Bank Terrace, Llandrillo Yn Rhos, Colwyn Bay, North Wales. It was here, at home that Mary, on 13 October, 1899, gave birth to their first child, a boy, Walter Henry. Their second and third children, Ernest James, b. 24 August 1901, and Edith 'Mae', b. 21 March, 1903 were also born at home at 11 Rhiw Bank Terrace. 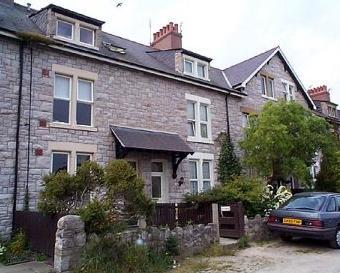 In about 1903, James Henry and Wilfred, interested in establishing in Canada, decided to travel to Canada to appraise the opportunities for immigrants under the Homestead Act of Canada of the day. Wilfred, it is understood, was still single. James Henry took Mary and the three children to Glen Mona to reside there temporarily while he and Wilfred travelled to Canada to evaluate the situation. It was during this time that Walter, eldest of the three children, and four years of age at the time, was to form a brotherly bond with one of his Dad's youngest brothers, Clarke, twin to Thomas Edward, and only three years older than Walter. This bond was to be strengthened during their adult years in Canada, for upon reaching adulthood himself, Clarke joined his older brothers James Henry and Wilfred and nephew Walter when he too emigrated to Canada (date uncertain). The writer, Gerald Clarke, Walter's eldest son grew up in Winnipeg enjoying a relationship with his "Uncle Clarke", who in reality was a "Great-Uncle". A "Great-Uncle" he was - truly. (Incidentally, I do not recall being aware that 'Uncle Clarke' was a twin, perhaps because he and 'Uncle Wilfred' were the only brothers of Grandpa Kissack that I had met. I do recall being told of the good times remembered by my Dad and Uncle Clarke of their childhood days playing together on the Isle of Man - probably in the company of Thomas Edward. I like to think so.)

Note: One, perhaps two additional sons of Thomas Henry emigrated to Canada. I recall attempting to contact a brother of my late Grandfather in 1959, in Enderby, British Columbia although the Christian name escapes me now. Will attempt to validate this with a search of records in the community at first opportunity. If a reader has any information on the other children of Thomas Henry and Isabella, please communicate such to the writer, Gerry Kissack - Thank You.

James Henry and Wilfred, it is believed, landed in Halifax, on Canada's east coast, and travelled by train across to Winnipeg, in Central Canada. At that time, homestead properties were being negotiated respecting lands at "Bluff Creek", on the west shores of Lake Manitoba, about 150 miles north-west of Winnipeg, in the "Manitoba House" area (now Kinosota), an outpost originally established by the Hudson's Bay Company in 1797 to oppose the operation of Metis hunters who had cut into their trade in the area. Both young men obtained work in the new land, initially in Winnipeg for a brief period, and then, at a place called "The Landing" which was on the Whitemud River at the south end of Lake Manitoba, about half-way between Winnipeg and Bluff Creek. At that time in the development of Western Canada, Lake Manitoba was a productive freshwater fish resource, and the north-south waterway for the burgeoning lumber industry. It was the dream of some of the land development entrepreneurs of the day that the "The Landing" region would become a major transportation centre. 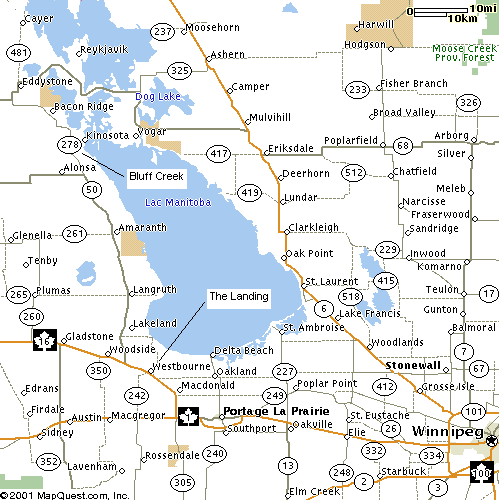 (Bluff Creek in relation to The Landing)

While working at The Landing, both men applied for homestead properties in the Bluff Creek area (Latitude: 50? 49 Min.00 Sec. Longitude: -99? 9 Min. 58 Sec.). They were successful in obtaining land entitlements under The Homestead Act of the day, and began clearing their respective properties and starting the building of homes which, along with meeting residency requirements, were tasks needed to be completed within certain time frames for title to eventually be issued in their names. 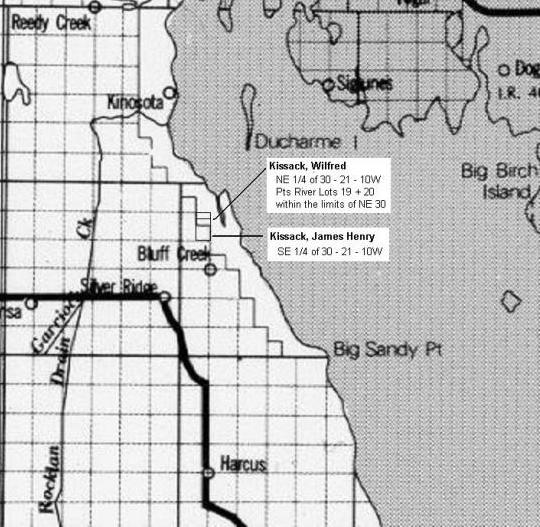 It appears that Wilfred, being single at the time, was able to remain year-round in Bluff Creek, working to establish residency and meet clearing and building requirements for the homestead qualifications, while James Henry, needing a source of income to save monies to bring Mary and the three children to their new home in Canada as soon as possible opted to continue employment at this still developing inland port on Lake Manitoba - "The Landing".

While employed at The Landing, James Henry recognized that in order to provide for the arrival of his family without too much delay, he would need a continuing employment income and opted to work there during the active season at the port, planning on discharging his obligations for homesteading property at Bluff Creek during the off season. The first period in the new country was trying, but during that time, James Henry built a small house at The Landing to accommodate Mary and the children on their arrival.

Commuting between The Landing and Bluff Creek was a major task - nearly fifty miles, no roads, just trails through bush and marshlands behind an ox-cart or with horse and buggy in the summer and cutter in the winter. This could take several days depending on the weather and the supplies being transported, but James Henry met the initial requirements there, clearing the specified acreages and building a 12' x 20' log house on the Bluff Creek property while still employed at The Landing.

Determining the exact dates of some of these events is difficult as this is written in the spring of the year 2002, almost 100 years after Mary arrived at the Port of Halifax circa 1904. She and the three children travelled by train across Canada to Winnipeg, then on by train and horse and buggy or horse and cutter to The Landing where they settled in at their new home. Will continue to research the specifics, but to defer committing these notes, recollections, and postulations to paper any longer would be to run the risk of never so doing. Having brought his Bride Mary and their first three children, Walter, Ernest, and Mae, all of whom had been born to the couple while they lived in Colwyn Bay, North Wales between the years 1898 and 1903, and requiring a continuing and immediate income, James Henry elected to accept employment in the then still developing inland port on Lake Manitoba known as "The Landing". Another factor influencing his decision at this time was that the children were approaching the age when it was time to think of the start of their formal education in this new land, and a school had been built at The Landing whereas no such facility existed at Bluff Creek. Walter and Ernest began school there, and apparently James Henry continued to travel, when possible, to Bluff Creek where he would work on further clearing of the land, and the building of a house on the homesteaded property that he might retain his entitlements.

It is documented in the Provincial Archives here in Winnipeg, that James Henry had, by 1908, built a 20' x 24' log home and an 11' x 12' outbuilding, while continuing his employment at The Landing, or if the lodge that was to become The Lakewood Country Club was by that date operating informally (without incorporation), then there. A Mr. F. W. Brydges, who, upon incorporation of 'The Club' March 11, 1909 was to be listed as it's first President, had earlier, in fact by October 1906 employed James Henry in some capacity, for on his application to the government of the day, dated October 8, 1906, for an extension of time to complete certain work on the Bluff Creek property, he gives as his reason for requesting such extension the fact that he is and has been, for a period, 'engaged with' Mr. Brydges. Writer's note (20 February, 2002): There is much to be added to these notes, both from research already completed, and from research yet to be done, but in the interest of sharing these beginnings; that those of You who read thus far will perhaps encourage a continuation, and because these fingers are experiencing their own difficulties and virtually refusing to go beyond this paragraph, I'm going to send this along with the sharing of some feelings that are, as I research further, running the risk of developing into convictions, that I will discover that:

"James Henry continued his work at both locations through until at least 1919 when Letters Patent were issued documenting that the Bluff Creek homesteaded property was deeded in his name, and that he, in turn, ceded the property to his younger brother Wilfred, who by this time had himself, married and begun the raising of his family in Bluff Creek. ( I personally recall stories told to me, by my Dad, Walter Henry, of his travels, with his Dad to work the homestead at Bluff Creek. Dad would, by the time of the issuance of Letters Patent, been of the age of twenty years.)"

That You might be aware of the following notes about school and church in Bluff Creek, I enclose these notes which are to be incorporated into my storytelling and postulating in what may later appear as a suitable time frame for their inclusion:

Glen Mona School - The School District of Glen Mona #1490 was formed April 19, 1908 when Wilfred Kissack, now in the area since 1906/7, donated land to the for the purpose of building a school and construction was begun with the school officially opening in 1910. Glen Mona School was included in the Alonsa School District on February 11, 1936 and became part of Turtle River School Division #32 in 1959. The school district was named by Wilfred Kissack who came from the district of Glen Mona on the Isle of Man. In the early days of Glen Mona School there were many children enrolled; in 1916 for example, they numbered forty-seven, In 1950 the school was renovated to continue in service until 1966 when it was closed when transportation system was established to incorporate students from the area into the larger, more well-equipped schools in the division.

St. James Anglican Church - In the winter of 1942-43 St. James Church was brought up fro m Lakeland on skids on the frozen lake. It was placed on a foundation built on two acres of land donated by George Hilche adjacent to the Glen Mona School property donated thirty-some years earlier by Wilfred Kissack. Until that time, church services were held in Bluff Creek in the Glen Mona School, as they had been almost since Glen Mona School had been built in 1910. The Anglican Church was present in the larger community since the early establishment of "Manitoba House" by the Hudson's Bay Company in 1797. The original name, "Doubtful Post" itself cannot be fully explained but it may have had something to do with a lack of confidence in the potential longevity of the settlement by the initial group of settlers - it was a barren, cold land that first winter. Prior to 1943, the closest sticks and stones church was St. Bede's Anglican Church in Kinosota, six miles north, as the crow flies, but too far to commute in a cutter behind a horse in the depth of a cold Canadian winter.